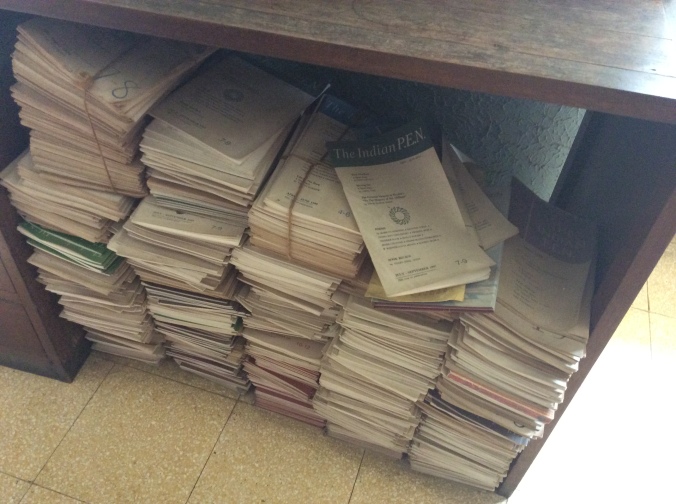 Research will focus on PEN archival material stocked at the former PEN offices in Theosophy Hall, Mumbai (issues of The Indian P.E.N. from 1934 onwards, reports of the centre’s activities, correspondence, minutes of committees, etc.); at the Center for Information and Documentation and at the Indian Committee for Cultural Freedom (ICCF) offices in Mumbai, and explore the archives and history of journals like Quest (started in 1954 and modelled on Encounter) sponsored by the ICCF. Research will also be conducted on the Progressive Writers’ Association, and on more recent writers’ and artists’ organisations in India today, like the Indian Cultural Forum.

These are some of the key landmarks, issues and questions I would like to explore: the entanglements and connections between the International Committee for Cultural Freedom and the PEN; the continuities between the Freedom struggle and issues of free speech and cultural freedom after Independence; the cultural Cold War for which India, like many other postcolonial countries served as a battleground, with the importance of American/CIA-funded journals and organisations at a time when “not everyone remembers how much of an anti-Soviet banner ‘cultural freedom’ became” (Margery Sabin); the importance of the Progressive Writers Association (PWA), and the Indian People’s Theater Association (IPTA) that are broadly part of what has been called the “Marxist cultural movement” in India; the Emergency (1975-1977) with its suspension of constitutional rights and strict censorship regulations; the banalisation and consolidation of the Hindu Right in the 80s and the growing attacks on writers, publishers, artists and scholars who are made to answer charges of obscenity, sedition or defamation; the ban (which India was the first country to enforce) on Rushdie’s Satanic Verses, with all its resonances and implications for issues of free speech in and outside India; “the use of India’s laws to suppress free speech”,  and the ways by which Indian writers and cultural practitioners mobilise today (through SAHMAT, The Indian Writers’ Forum, South Asia Citizens Web, petitions, marches, flashreads, etc.)

What are the intellectual, social and political origins of the PEN All-India Center? How was the ideological battle (communist / anti-communist, collectivist / liberal)— central to India’s intellectual life in the 50s and 60s—also played out in the agenda of writers’ collectives, literary journals and conferences? And how were issues of literary neutrality and political neutralism entangled at the time? How did the PEN All-India Center and other organisations respond to the Emergency, to the ban on the Satanic Verses, and to other local and global censorship events? In what ways was the poet and critic Nissim Ezekiel, founding editor of Quest and general secretary of the PEN All-India Center for more than 30 years, both a pivotal figure and an ambivalent one on issues of free speech? Why were/are other organisations (like SAHMAT, which was born in the wake of the assassination of playwright Safdar Hashmi in 1989) much more vocal and influential in defence of cultural and literary freedoms? How did the PEN All-India Centre, with its translational agenda and the organisation of All-India Writers’ Conferences (destined to be, in Sophia Wadia’s words, “a regular forum where Indian Writers meet”), both strive to shape (a sense of) internationalism, and create a sense of ‘Indian literature’, ‘Indian literary history’ and ‘Indian literary criticism’? How were these highly crafted and interconnected ideas and ideals of ‘Indian literature’, ‘world literature’, but also ‘India’ and the ‘world’ constructed in the pages of The Indian PEN?