Margaret Storm Jameson was President of the English Centre during the war years 1938-1944. 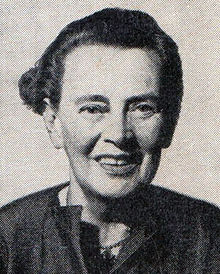 Herself a novelist, hailing from Whitby in North Yorkshire, Jameson was hugely prolific and very well respected during her lifetime but has since been neglected by critics and scholars alike.

During her lifetime Jameson published more than 48 novels, as well as plays and countless polemics detailing everything from her views on marriage to her hopes for Europe after the war.

Towards the end of her life she became very disillusioned with her own literary career, describing her presidency of PEN as ‘the only act of a dull life’.

Her impact on the organisation was tangible.

It was she and International Secretary Hermon Ould who set up the PEN Refugee Fund in 1938, and they both worked tirelessly during this period to support writers escaping from Nazi Europe.

In 1941 it was she and Ould who organised the famous London Congress, which brought refugee writers from Europe together with influential literary figures from all over the world, at the height of the Blitz.

Food for the Congress was tricky to come by but Ould and Jameson pulled out all the stops and managed to arrange an lavish dinner at the Ritz to reward their long-suffering guests.

Despite wartime conditions and the difficulty of traveling to England, more than 800 guests attended from more than 30 countries including India, China and Mexico.

They even had to hold dinner across two rooms, with a host in each!

Another PEN figure motivated by the organisation’s original tenets of internationalism and friendship, Jameson continued her work following the war. She was invited to serve as a Honorary President of the Writers in Exile Center in 1952, served on the Writers in Prison Committee and worked throughout her life to help and support writers from all over the world.

Even in her eighties there are still letters from Jameson recommending writers for membership of PEN or asking about publishing opportunities for young writers who had asked for her help.

Find out more about Storm Jameson and her work.